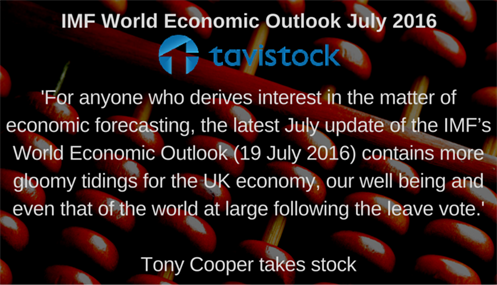 Apparently, Brexit has thrown a metaphorical spanner in the works from the standpoint of reducing annual growth forecasts not only for the UK economy (GDP down by 0.2 percentage points for 2016 to 1.7% and 0.9 points down for 2017 to 1.3%) but for the advanced countries collectively and even for the world economy (down by 0.1 percentage points in both 2016 and 2017).

This is just to point out that those forecasts are based purely on an increase in uncertainty. In the UK, this heightened economic and political uncertainty is supposed to affect aggregate demand (specifically household expenditure and public and private sector investment). However, those forecasts are not based on any new or recent economic data. This is awaited. It is true that there was a slowdown in corporate investment ahead of the referendum vote, but the projected decline in household consumption is not yet established in the ONS aggregate data series. These are quarterly and we only have 2016 Q1 (January to March). Retail sales we get on a monthly basis, but these are also lagged. The latest ONS figures are for May with the pattern and growth rate appearing robust, increasing 6% in the year to May, after 5.2% in April and the highest growth rate since September 2015. However, the British Retail Consortium survey published on 12 July stated a 0.5% percentage fall on a like-for-like basis.

The point of all this is to state again, following the comments made about Brexit in the Tavistock blog, is that there is little so far on which to base prognostications of doom and gloom. Some of the economic modelling that has been done is clever, but riddled with technical difficulties. It has also been mainly focused on longer term scenarios, e.g. a 15 year horizon for modelling trade relationships is typical. The IMF forecasts are not based on any new information and largely the result of imputing a ‘stochastic shock’ (the leave vote) into the model and seeing what outturn results from the interaction of the variables. It is telling that the IMF Report itself comments that it is ‘very difficult to quantify potential repercussions with the event still unfolding’. The outturn may see some effects coming through over the course of twenty-four months, due for example to households feeling poorer (shares and house prices lower) but, on the other hand, the lower exchange rate will work to shore up demand.