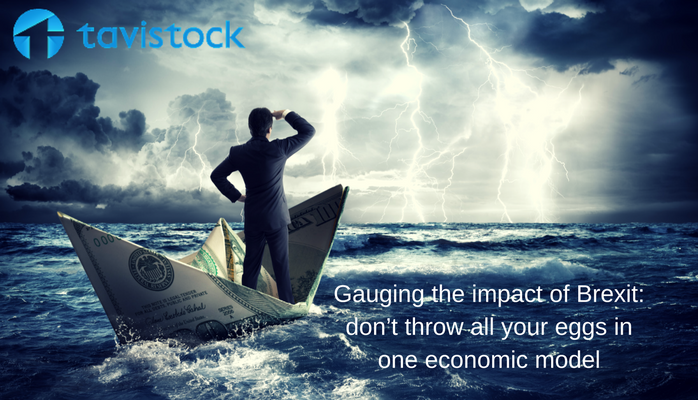 Gauging the impact of Brexit: don’t throw all your eggs into one economic model

Author: Tony Cooper
In a previous blog, we claimed that Brexit shows up serious issues relating to economic analysis, forecasting and government policy choices. The economic modelling that had been done was focused on the long term effects of Brexit and the consequential impact of changing trade relationships on GDP and thus economic welfare. We now ask whether we are better placed to make an informed judgement after the Autumn Statement and forecasts (23rd November), based on one of the most comprehensive economic models of the UK economy, that of the Office for Budget Responsibility (OBR).

Can we rely on the OBR report?

The answer in short is no. Disentangling the impact of Brexit from other influences is technically difficult. The OBR forecasts are only a guide to the direction of travel for the UK economy, and not a great deal else, a remark which applies to other institutes’ work also. The OBR saw a negative impact of Brexit, although not as great as in other forecasts. To name but two, earlier work (May 2016) by the National Institute of Economic and Social Research (NIESR) and, more recently (November), by the Bank of England, came out with more pessimistic results. The NIESR estimated a short term economic impact of the Brexit vote of 1% of GDP in 2017 compared with remaining a member, but increasing to 2.3% in 2018. For its part, the Bank of England’s November Inflation Report (prior to the Autumn Statement) produced GDP forecasts showing percentage point reductions of 0.8, 0.7 and 0.6 for GDP growth in 2016, 2017 and 2018 respectively, well below the 2.0% outcome expected for 2016.

The current buoyancy of the economy is wrong-footing economists

Given the current buoyancy of the economy, yet with all forecasts now showing a lower trajectory than previously for the UK’s GDP, questions are being raised about the quality of economic forecasting in general, and whether any of the ‘official’ teams (OBR, IFS, BoE) are better placed than anyone else to provide useful guidelines. The question is particularly important for the Brexit negotiations due to start after March 2017, and also after 2019 when exit has occurred.

There is a dichotomy between short term forecasting models, such as that of the OBR and Bank of England, and the longer term gravity models for estimating trade relationships. The latter use the results, and comparison with counterfactuals, to answer questions about income levels and GDP growth benefits from membership of a single market or customs union. The OBR model is not in that category. It is mainly a framework for forecasting the public finances along with other interdependent variables, GDP growth, inflation and employment. Formerly the Treasury model, it was first set out by the OBR in Briefing Paper No.3 (October 2011), later updated in BP No.5 (October 2013) with a number of updates and re-estimations along the way, these to be incorporated in a later BP. Unsurprisingly, issues relating to Brexit and its economic impact were largely ducked in the absence of government guidelines.

So has anything been learned? The OBR itself is confident that its model is good enough to forecast Brexit-related downturns in both consumption (from the squeeze on incomes from the imported inflation effects of sterling depreciation) and investment (the knock on effect of lower consumption and uncertainty). On other matters, such as the effects of Brexit on trade, there is much less confidence. In fact, the OBR has used the results of other external forecasters (the NIESR, the OECD and the London School of Economics Centre for Economic Performance, averaging their estimates to recalibrate the size of the trade effect following Brexit. The OBR’s conclusions from this exercise are surprising and possibly optimistic. In 2017 and 2018, the OBR expects GDP growth to be boosted as sterling depreciation supports exports and reduces imports. Then, from 2018 onwards, leaving the EU is expected to result in reduced trade, but with symmetrical effects on exports and imports so the net trade effect is broadly neutral. This subtracts only 0.1 percentage points a year from GDP growth from 2019 onwards.

It should be said that net trade (i.e. the balance between exports and imports) is not what most researchers doing long term studies emphasise. They usually assert that it is the effect of an economy’s ‘openness’ (trading intensity) that is important for growth and prosperity. This occurs through the twin cumulative effects of competition and technology transfer, the latter accompanying direct inward investment stimulated by foreign trade.

Momentum studies are a useful adjunct…

We may well ask then if the OBR and other models are of any use for short and medium term forecasting, not just on complex matters such as external trade relationships but even with the domestic economy? Increasingly there is an argument that more useful pointers come from momentum studies which are based on ‘high frequency’ regular surveys of particular groups/sectors in the economy. Among those which are commonly cited are those from the CBI and Markit Economics. Two of the latter’s monthly surveys are closely watched by the OBR, the Bank of England and other bodies to assist in their forecasting efforts. They provide real time data on activity on a monthly basis. The Markit PMI™ (Purchasing Managers’ Index™) tracks output, new orders, employment and prices across key sectors while, similarly, Markit’s monthly Report on Jobs provides advance indication of changes in labour market conditions. These surveys are not a substitute for economic modeling, but the OBR and others make adjustments to their models when prompted to do so by these momentum indicators.

…but uncertainty can still throw a spanner in the works

Another issue which regularly rears its head when forecasting appears to be out of touch with reality is the problem that formal models of the economy do not handle the problem of uncertainty at all well. In fact, in the OBR, there is no specific assumption about uncertainty incorporated in the general model, albeit the business investment equation includes a specific term for uncertainty about demand The OBR’s business investment function captures uncertainty by incorporating an indicator taken from the CBI Industrial Trends Survey to pick up the short term dynamic effects. In general, lack of a formal treatment of uncertainty is recognised as a potential source of error. The OBR, Bank of England and others generally incorporate fan charts to show different outcomes with the central forecast being the one with the highest probability and, around it, a distribution of possible outcomes within recognised statistical error margins.

More recently, the Bank of England has addressed the issue, recognising that uncertainty is not one dimensional, is likely to occur through a number of channels and with different degrees of severity. Different measures do not correlate well with each other, nor with those variables to which they are attached. It is important to measure directly (through whatever means are available) different types of uncertainty – in financial markets, on consumers, and on businesses – rather than take the OBR’s simplistic line and focus only on that relating to business investment.

Kristin Forbes, a member of the Bank’s MPC, has written that uncertainty is the whipping boy that may cause us to miss important underlying dynamics in the economy. In a recent speech, she recently demonstrated that many measures of uncertainty were neither closely correlated with investment and, importantly, produce very different predictions for GDP and GDP growth. Forecasts from formal models can be biased in either direction through under or over estimation of the effects of uncertainty. She cited a number of measures including GfK survey data on consumer confidence and financial markets, CBI uncertainty, IBES estimates, FTSE volatility, sterling volatility, a Global Policy Risk Index (GPRI) and Economic Policy Uncertainty (EPU). For its own official purposes, the Bank of England has adopted a composite measure drawn from those listed, which is not to say that it has been shown to be demonstrably superior.

Forecasting errors will occur, but models are helpful in conjunction with other approaches

In conclusion, we should not throw the baby out with the bath water in judging the utility of formal models in forecasting the economy, but be willing to use various approaches in combination. The OBR’s forecasts as presented in the Autumn Statement are best seen as a tentative guide for the UK economy over a five year forecast horizon, but with increasing likelihood of error as time passes. It is expected that the next ONS quarterly data to emerge in January 2017, as well as other data before the next Budget in March, will lead to revisions.