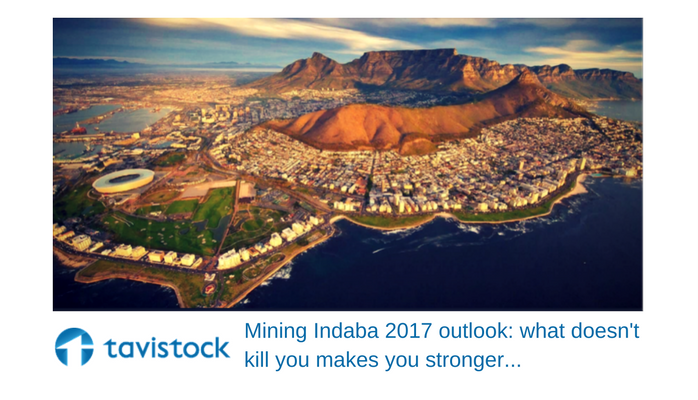 Next week Cape Town will once again play host to the annual Mining Indaba, a significant bellwether event for the state of the mining industry. Last year’s gathering was set against a backdrop of a sector in serious financial distress made worse by a bleak outlook. Column inches were dedicated to speculation as to whether several iconic FTSE100 miners would suffer declines serious enough to fall out of the index – including Anglo American which celebrates its centenary this year. And yet, as 2016 drew to a close, a feeling of recovery (however tentative) had returned to the sector, with mining shares delivering strong gains.

There is no doubt that recent years have been tough on miners. There were those that fell by the wayside or saw their equity diluted out of sight. But for many, it was a case of what doesn’t kill you makes you stronger. And as the world’s largest mining investment conference approaches, the leaner and meaner veteran survivors are facing the future with clenched jaws, determination and, for the first time since 2010, a year under their belt of positive moves in commodity prices. All this has brought about a feeling of greater optimism. Most anticipate the mood to be very different to 2016’s timorous affair. So, what to expect for the year ahead?

The current tone and approach of mining companies suggests that disciplines instilled through the harrowing experience of the post-2010 commodities rout will be long lasting and influence the strategies deployed in the years ahead. It seems growth for its own sake is off the agenda. The new zeitgeist is all about profitable production, returns per share or per dollar invested.

A recent report by consulting firm EY seems to support the view that management teams will be less gung-ho, particularly on large scale M&A. It notes that deal volume increased by 33% to 477 deals in 2016 but, and it’s a big but, the y-o-y deal value dropped by 9% to US$44.3bn, the lowest level seen since 2004. Four of the top ten deals were undertaken by Chinese acquirers, and copper assets comprised three of the top ten deals for the year by value.

As we noted in our 2016 Indaba blog, it is clear that much of the divestment strategy by the larger players followed commitments to shareholders to realign portfolios and reduce debt. Think Glencore. Think Anglo. Those companies that have strengthened their balance sheets and pay dividends have been rewarded by investors. The result has been strong performance in the last 12 months with the traditionally less volatile majors posting enormous returns – Rio Tinto more than doubling, and Anglo American more than quadrupling from the lows seen in late 2015. It is fair to say that for many of the survivors, the gains of 2016 reflect the pain felt in previous years. Little wonder that London’s star performer is an iron ore company that has posted share price gains of 500% in the past 12 months.

Exploration investment has been below trend in the years since the Global Financial Crisis.
New mine investment has been below trend since the metal price downturn took hold from 2011 onwards. Almost all new production from the last upswing has finally arrived. Mine grades continue to fall, and supply inelasticity is a feature of several key commodities. Copper and gold are the most obvious beneficiaries of this supply-side constraint alongside mineral sands and some put zinc and diamonds into the same basket.

So, which companies will stand out and be the standard bearers for tomorrow’s sunlit uplands?

Despite the good news, any sense of complacency will be challenged in Cape Town next week. In the great talking shop, executives will be forced to justify their existence and their projects. They will have to articulate to peers, the media and potential investors their plans for the future, and make a case as to why their shares are good value.

It is not risking too much to say that some companies will do well. Well-run companies continually improve, just as good deposits continue to get better. Whether you are in exploration, development or production, the key lies in delivering on your stated targets. A company that delivers on its promises will benefit over time from its operational (and communications) integrity. Of course, much of this is often in the price, which makes investment decisions for the buy-side difficult.

Finally, it is worth noting that China continues to play an extraordinarily key role in the resources space and forget this at your peril. Last year the capital raised domestically (in the resources sector) in China doubled to US$100bn, which was the main driver behind an aggregate rise of capital in the sector of 9% y-o-y to US$249bn. China also dominates marginal demand for many commodities, as it does supply for many companies further down the chain. We live in a global world, for now at least.

From a Tavistock perspective, we are celebrating our 10th year of consecutive team attendance at Mining Indaba. If you would like to meet up next week please do get in touch. We also look forward to raising a cold drink with you, to toast the leaner, meaner, stronger survivors at our annual Monday night cocktail party in Mouille Point which we are hosting with Memery Crystal and Shore Capital.