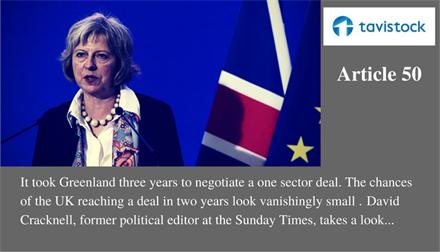 Goodbye and thanks for all the fish. That was basically the message from the mammoth nation of Greenland when it left the EU in 1985.

Its exit negotiations, although complicated by relations with Denmark, had taken just three years; but their main interest was cod and it never exactly had any problem with immigration or calls for big contributions to the European budget.

So, there is one precedent for a country leaving the EU, albeit a little talked about or studied one; but it gives us some scant evidence as to how matters might proceed.

If it took three years for Greenland to negotiate just one sector deal, with an European Community then of only 10 members, there is little chance of the UK Government being able to get a complete Brexit deal within two years.

Even the format of the negotiations is in dispute: the EU’s current position is that negotiations on trade deals can’t even begin until arrangements for the UK’s departure are finalised, a position which the UK strongly disagrees with. The chances of a deal in two years look vanishingly small, whatever the Prime Minister’s hopes.

It is, therefore, likely that transitional arrangements will be put in place. Yet even then, leaks of the EU’s negotiating position already suggest that these will be limited to three years. Can the Government reach a comprehensive deal even within five years? And given that will be beyond the next general election, will Mrs. May even be in No.10 to sign it?

Frustration and turmoil with the whole negotiation process within the ranks of the hard Brexit wing of the Tory party (they used to be called quaintly plain ‘Eurosceptics”) could see her position weakened; and could coincide with a more electable Labour leader finally replacing Jeremy Corbyn by 2020.

There is just too much to deal with: the rights of EU citizens with families established here, the rights of UK expats (‘Brexpats’) living abroad, the Irish border issue, negotiations on trade, and the exit payment – to name just a few.

One key issue which is certain to take years to resolve is that of the 3m EU families who have been based in the UK for years and now face huge uncertainty – potentially for years, as do UK citizens abroad.

Whilst both sides recognize the need to settle this issue as soon as possible, there is little guidance as to how this will be done. Information from the EU suggests that the EU is sensitive to the desires of the millions of UK citizens who will mourn the loss of their EU rights, but how this can be reconciled with the EU principles of “reciprocity, equality, symmetry and non-discrimination” is unknown.

The EU’s opening negotiating stance also makes specific reference to position of the City of London, stating that there will be no special deal “providing UK-based undertakings preferential access to the single market and, or the customs union”. This doesn’t look good for those who advocate the City maintaining its current position in the financial world, regardless of the UK’s relationship with the EU.

One key message from the Prime Minister, however, is the recognition that the UK cannot “have its cake and eat it.” Controlling our borders is worth the payoff for loss of access to the single market if necessary.

Ironically, however, even hard Brexiteers like Liam Fox are talking about the need to keep up the numbers coming here so as not to damage UK growth and prosperity. And David Davis talks of an immigration policy “full of exemptions”. After all, who will replace the 49 out of 50 applicants for employment at Pret a Manger who are not born in the EU otherwise?

The Prime Minister has however today stressed that she does want to do a deal. As the UK is currently a significant contributor to the EU’s coffers, so arguably will the EU.

Ukraine makes significant payments to the EU to enable it to have access to the Single Market whilst not being bound by the other freedoms of the EU. Perhaps we will have to do the same.

And in the end – like most divorces – once the money is settled, the post-divorce relationship will fall into place.