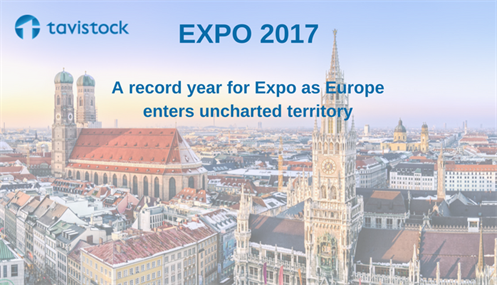 Arguably the second most important European property conference after the world renowned MIPIM conference in the South of France, Expo provides a very different user experience, which is noticeable right from the outset. No long registration process, no queues to enter the venue and this year, as in previous years, a palpable buzz of property people trying to do business.

Located on the outskirts of Munich, the venue lacks MIPIM’s Croisette and line-up of luxury yachts, but there is a much clearer boundary between work and play. In general, the work and meetings happen during daylight hours in the Messe Munchen and the entertainment and networking take place at night in Munich’s warren of beer halls. Great if you like Bavarian beer and lots of schnitzel, but harder if you’re watching your waistline…

Last year, the chatter from our continental colleagues was about Brexit as many attempted to fathom how and why their UK counterparts had opted to leave the European Union, especially given that most of them felt we already had a pretty good arrangement – one foot in, while maintaining a veto and a foot on the outside.

This year, our German colleagues were more preoccupied with the result of their own election and the complicated coalition that Angela Merkel is attempting to negotiate with the Christian Social Union party, the Greens and the Free Democratic Party. Yet another European election where the incumbent has lost a significant share of the vote to more populist parties.

The EXPO programme focussed heavily on the importance of investing in urban development and the wave of prop tech start-up companies looking to revolutionise the way the property industry operates. It also welcomed the Asia-Pacific region, responsible for 50% of investment into Europe, into the Investment Locations Forum for the first time.

Running in the background, though, the conversations behind the pomp and hubris of the stands and presentations was more considered, with many trying to work out where Europe is in the property investment cycle and where future value is likely to come from. While on the surface the European market appears to be in a good place, there are some major questions occupying the minds of property folk about what comes next.