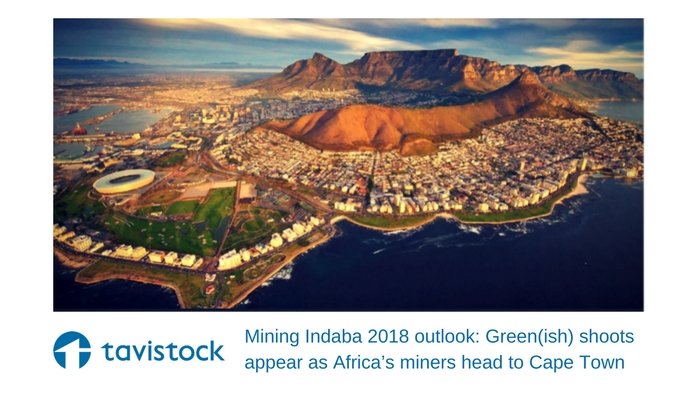 It is that time of year again where the international mining community from the UK, Canada and Australia briefly escape the northern hemisphere winter and head down to sunny Cape Town, where days of back-to-back meetings are followed by evenings of back-to-back receptions.

Cyril Ramaphosa and ‘The Crocodile’ in Davos

Unfortunately, a 1,000-day drought has really started to bite the city, with day zero, when Cape Town becomes the world’s first metropolis to run out of water, a little over 9 weeks away. You will notice the severity of the situation even before you land as pilots read you the scripted water measure controls as you start your descent into Cape Town. Even the Indaba website has a water shortage measures page for attendees. Theewaterskloof Dam (below), source of roughly half of the city’s water is at a mere 13 percent of capacity.

Don’t be surprised to see drained swimming pools at the villas, restrictions on bathing at your hotel, dusty cabs and a generally more brownish tinge to the landscape.

A fund manager who was down there recently, described a trip to the gym where water usage in the showers was monitored by a guard, and the swimming pool was so empty that his arms scraped the floor when doing front crawl.

Meanwhile, in Canada, the market for IPOs totalled C$5.1 billion in 2017, a five-year record as revealed in a recent PwC survey.

Palladium ended the year as the best performing mainstream commodity with a gain of 56%, and is now trading higher than platinum. In the base metals, it was aluminium that topped the charts, adding 32% in the year.

Several years of cost cutting and balance sheet repairs, mean that miners enter this period of higher prices in relatively good shape, with some decent 2017 numbers already being reported to the market. Share prices, however, still haven’t caught up to historical levels.

We expect little appetite for M&A in the short term, but with very little exploration spending for some time, the sector continues to play into the historic cyclical trends which can only see demand begin to outstrip supply and a race for resource potential starting up again.

Mining Indaba MD Alex Grose recently told Mining Review that investor visitor numbers are expected to grow even more this year from the 7,000 delegates in 2017; this is largely down to the renewed investment focus for the event. There will also be about 25 African mining ministers at this year’s event, as well as a junior mining showcase.

The 121 Mining conference at Welgemeend in Cape Town has also grown into a strong investor event in its own right which has seen it sold out, even with its successful expansion last year, with 85 mining companies and 350 investors and analysts attending.

All change down in southern Africa

At the back end of last year, southern Africa’s political landscape experienced a major overhaul with both Zimbabwe and South Africa experiencing a change of leadership. Immediate in the case of the former, and in-waiting for the latter.

While Cyril Ramaphosa’s election as the new President of South Africa’s ruling ANC party was part of regular five-year cycle, the ousting of Robert Mugabe as the near 30-year reign as president of Zimbabwe in a peaceful coup was much more of a surprise.

Unfortunately for those heading to South Africa to spend their forex, the rand has strengthened strongly since Ramaphosa’s victory, meaning the seafood and wine tab may come in a bit higher than expected a few months ago at ZAR16.99/£1.

The Ramaphosa effect on the rand since December

Jacob Zuma remains the country’s president until the next elections (unless he is pushed out before then). Those sticking around until Thursday will notice some major road closures in town as the annual State of the Nation address takes place at parliament that evening.

Further north, in the DRC, new mining laws, which include a ‘super profit’ tax and potential jump in royalties on metals like cobalt, have just been implemented. Another hot discussion topic for the conference.

Struggling to find your meeting location? There is an app for that

Finally, we at Tavistock have discovered a very nifty navigation app that could come in quite handy down in Cape Town.

The team over at What3Words have split the entire planet up into 3x3m squares and then named each one of them individually. If you are standing at a booth, meeting someone at the Cullinan Hotel, or just trying to find someone at a cocktail party, you can send your precise location.

In case you were wondering, the entrance to our cocktail party on Monday night is at reacts.deceiving.moonwalk.

The following members of the Tavistock team will be in Cape Town if you need us:

Live coverage of the event

9.10am Keynote welcoming address by SA minister of mines Mosebenzi

11.30am Fireside chat with Anil Agarwal of Vedanta and Evy Hambro of Blackrock on strategies for long term shareholder value

9.05am The investment case for gold: An Interview with Mark Bristow

12:35pm Panel on Diamonds: How will the industry adapt to millennials and synthetics?

9am A Keynote speech by Robert Friedland of Ivanhoe Mines

9am Panel discussing outlook on investment in 2018

11.10am Gold mining investment panel on outlook and opportunities in the current investment cycle

4.10pm Fund manager panel on opportunities and risks across Africa

2pm Sources and structures for financing a mine through to production