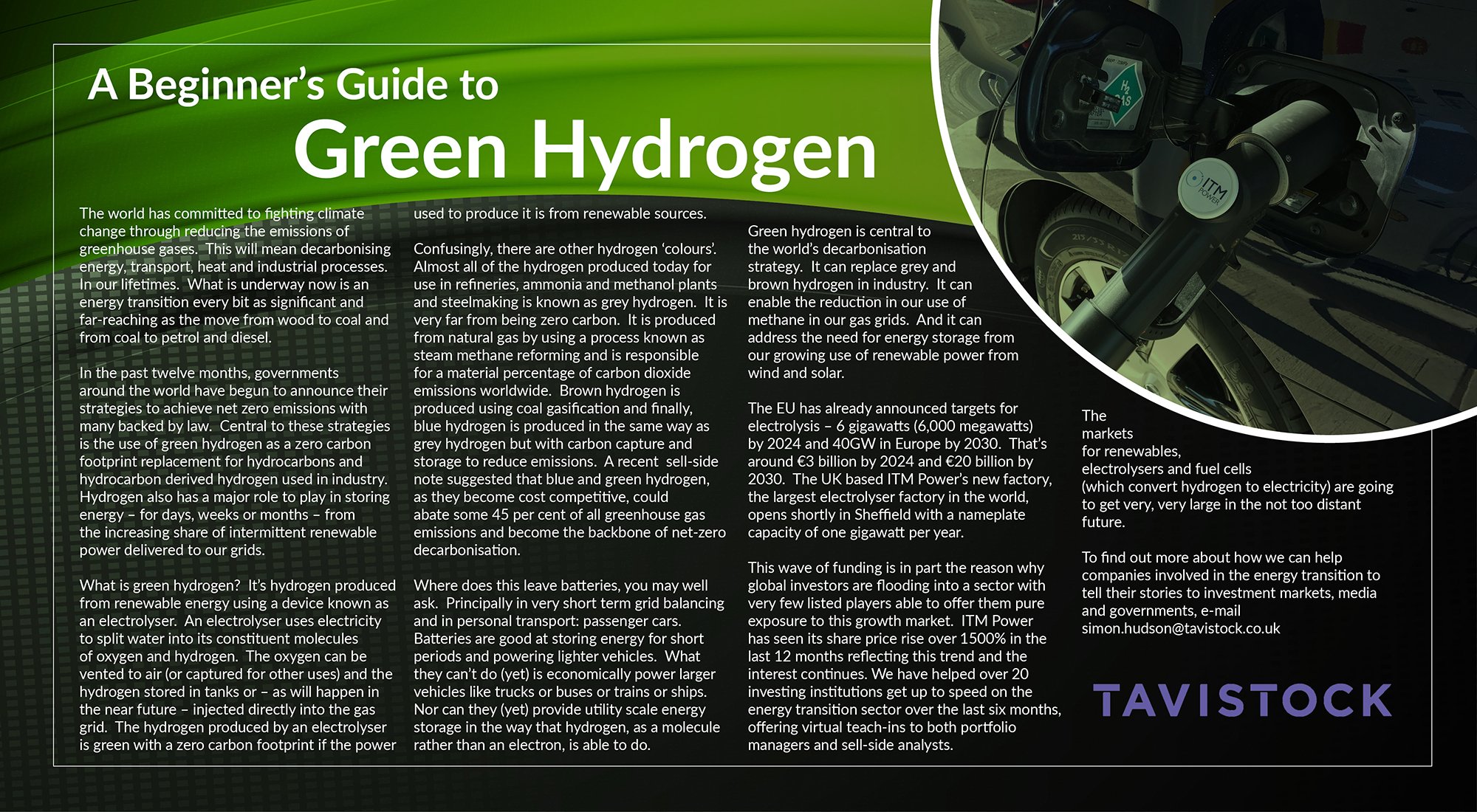 The world has committed to fighting climate change through reducing the emissions of greenhouse gases.  This will mean decarbonising energy, transport, heat and industrial processes.  In our lifetimes.  What is underway now is an energy transition every bit as significant and far-reaching as the move from wood to coal and from coal to petrol and diesel.

In the past twelve months, governments around the world have begun to announce their strategies to achieve net zero emissions with many backed by law.  Central to these strategies is the use of green hydrogen as a zero carbon footprint replacement for hydrocarbons and hydrocarbon derived hydrogen used in industry.  Hydrogen also has a major role to play in storing energy – for days, weeks or months – from the increasing share of intermittent renewable power delivered to our grids.

What is green hydrogen?  It’s hydrogen produced from renewable energy using a device known as an electrolyser.  An electrolyser uses electricity to split water into its constituent molecules of oxygen and hydrogen.  The oxygen can be vented to air (or captured for other uses) and the hydrogen stored in tanks or – as will happen in the near future – injected directly into the gas grid.  The hydrogen produced by an electrolyser is green with a zero carbon footprint if the power used to produce it is from renewable sources.

Confusingly, there are other hydrogen ‘colours’.  Almost all of the hydrogen produced today for use in refineries, ammonia and methanol plants and steelmaking is known as grey hydrogen.  It is very far from being zero carbon.  It is produced from natural gas by using a process known as steam methane reforming and is responsible for a material percentage of carbon dioxide emissions worldwide.  Brown hydrogen is produced using coal gasification and finally, blue hydrogen is produced in the same way as grey hydrogen but with carbon capture and storage to reduce emissions.  A recent  sell-side note suggested that blue and green hydrogen, as they become cost competitive, could abate some 45 per cent of all greenhouse gas emissions and become the backbone of net-zero decarbonisation.

Where does this leave batteries, you may well ask.  Principally in very short term grid balancing and in personal transport: passenger cars.  Batteries are good at storing energy for short periods and powering lighter vehicles.  What they can’t do (yet) is economically power larger vehicles like trucks or buses or trains or ships.  Nor can they (yet) provide utility scale energy storage in the way that hydrogen, as a molecule rather than an electron, is able to do.

Green hydrogen is central to the world’s decarbonisation strategy.  It can replace grey and brown hydrogen in industry.  It can enable the reduction in our use of methane in our gas grids.  And it can address the need for energy storage from our growing use of renewable power from wind and solar.

The EU has already announced targets for electrolysis – 6 gigawatts (6,000 megawatts) by 2024 and 40GW in Europe by 2030.  That’s around €3 billion by 2024 and €20 billion by 2030.  The UK based ITM Power’s new factory, the largest electrolyser factory in the world, opens shortly in Sheffield with a nameplate capacity of one gigawatt per year.

This wave of funding is in part the reason why global investors are flooding into a sector with very few listed players able to offer them pure exposure to this growth market.  ITM Power has seen its share price rise over 1500% in the last 12 months reflecting this trend and the interest continues. We have helped over 20 investing institutions get up to speed on the energy transition sector over the last six months, offering virtual teach-ins to both portfolio managers and sell-side analysts.

The markets for renewables, electrolysers and fuel cells (which convert hydrogen to electricity) are going to get very, very large in the not too distant future.

To find out more about how we can help companies involved in the energy transition to tell their stories to investment markets, media and governments, e-mail simon.hudson@tavistock.co.uk